> Genre: Uncategorized > “They never realized they were puppets…made to dance and love and die and suffer…just like me…” 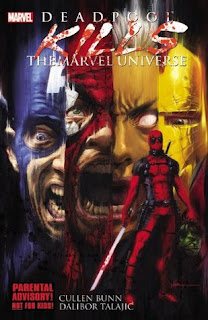 The Deadpool Killogy is comprised of three graphic novels. The first, Deadpool Kills the Marvel Universe, starts when Professor Charles Xavier has Deadpool committed to Ravenscroft Asylum. What he doesn’t know is that the famous Dr. Benjamin Brighton who heads the hospital is really Psycho-Man. The supervillain plans to brainwash Deadpool, hoping to form a super army, but it doesn’t work out like he planned. He ends up making Deadpool’s  subconscious stronger.

It’s true that Deadpool has always had voices in his head, but now there is just the one very loud voice. That voice makes him see the truth: everyone in his universe doesn’t really exist. They are just entertainment, not really alive. So it’s up to Deadpool to put them out of their misery.

So, he kills them all. We see Deadpool fighting multiple heroes and villains. He shoots Spider-Man, blows up the Avengers, even kills Thor with his own hammer. They all end up dead or otherwise incapacitated. The book ends with Deadpool creeping up on the writers as they are brainstorming the ending: 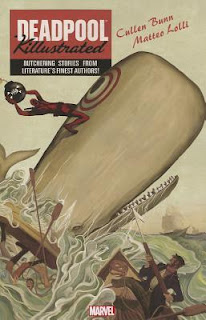 Deadpool killed the entire Marvel Universe, but it didn’t help. In Deadpool Killustrated, he enters the ideaverse. You know how every story is the same story over and over? The characters in classic literature are the “inspirational building blocks” for the Marvel characters. If you kill the inspiration, they will cease to exist.

Therefore, Deadpool has to become “metacidal.” The majority of the book is Deadpool encountering, then murdering, characters from Captain Ahab and Moby Dick to the Little Women to Don Quixote. The characters start to morph into equivalent heroes as they die, indicating that the ideaverse is falling apart.

Eventually, Sherlock Holmes puts together a task force to track Deadpool down and stop him. The new subconscious is put into Frankenstein’s monster at one point, which is kind of cool. I didn’t really understand the voice when I was reading the book because I read the second book first, before I realized it was a trilogy. 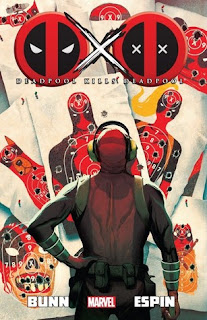 “At long last, he came to a conclusion. If he –if Deadpool was the only one who realized the world was fictional…then perhaps Deadpool was the source…and all the fragments of the multiverse were his dreams made real. This, of course, did not mean his search for nothingness would end. Quite the opposite, in fact. If all the worlds were to die, so too must all Deadpools…”

The third installment, Deadpool Kills Deadpool shows that Deadpool still hasn’t been able to destroy the universe. We start with a Deadpool who is fighting a giant robot (Okay, we actually open with someone throwing Headpool in a microwave). He is attacked by another Deadpool, an evil one. The Deadpool Corps helps the good, at least better, Deadpool and fills him in.

There are versions of Deadpool all over the multiverse, and now Evil Deadpool is on a mission to take them all out. Since Deadpool is the origin of everything, according to Watcher (Guy with large head, omnipotent, traditionally watches but doesn’t intervene), who is now a Deadpool fanboy, if Evil Deadpool succeeds in killing them all, the universe will cease to exist.

There were lots more that didn’t get names. The tone of the third book is a lot different from the first two. I think it’s because the Deadpool we focus on isn’t the same one who was narrating before. Honestly, all three are basically the same: existential crisis, kill, kill, kill. The hundreds of Deadpools made the book entertaining enough, so overall I was satisfied with the conclusion.

I have enjoyed reading about Deadpool. I expected violence and snarkiness, but I didn’t expect him to be sympathetic. Maybe I’m reading too much into it, maybe I’m like those women who write letters to serial killers or whoever makes that weird Creepypasta pin where they feel bad for Jeff the Killer even though he is fictional and gross, but I saw some real pain in Deadpool. In a weird way, killing everyone is his way of saving them, being a hero. I hope I’m not misinterpreting this horribly. It makes the character seem a lot more complex and interesting.

The reason I decided to read this series is that I was intrigued by Deadpool Killustrated while I worked at the bookstore. I requested it from the library, then realized that it was the second book in a trilogy and decided to read one and three as well. The meta stuff is right up my alley. I’m not going to pretend that I don’t see some flaws in Deadpool’s logic, but I’m willing to suspend my disbelief.

It’s a bit gimmicky, or like someone’s fanfic, but in a good way. What would happen if Deadpool fought the Fantastic Four? The Three Musketeers? A million versions of Deadpool? (Answer to every question: blood, death, dismemberment.) Overall, the Killogy was entertaining and had a lot more philosophy than I expected. It was a pretty good intro to the Merc with a Mouth, though I’m sure there are lots of things I didn’t understand.

My whole review has been served up here, but you can click through to my blog to see it in its natural environment, check out my other reviews, or help me get some page views. Click through here, if you want.