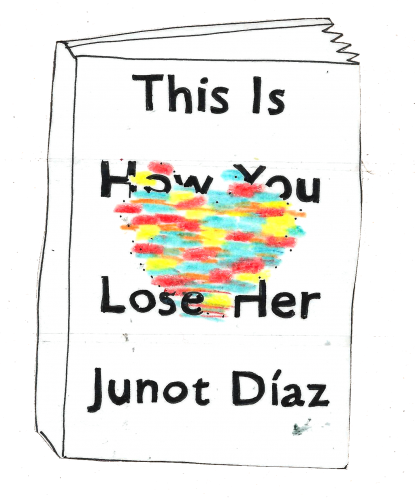 Junot Diaz’s This Is How You Lose Her (2012) is an eight story collection of machismo, misogynistic narratives centered around Yunior, a seemingly compulsive cheater who is forced to face the consequences of his actions.

Never having read Diaz before, I had no idea what to expect, and after reading epigraph by Sandra Cisneros, I used my knowledge her structure and style from The House on Mango Street (1984) to guide me. What ensued was a rather confusing read.

Unlike some who found Diaz’s use of Spanglish to be the cause of their confusion, the shifting perspective and time in each chapter are what did me in. This Is How You Lose Her is similar to The House on Mango Street in that Diaz also mixes the Spanish and English, doesn’t include quotation marks to clarify speakers in dialogues, has short chapters, and gives insight into the machismo that is familiar in Latino culture. But it is different in that the collection is not fully a cohesive unit and is littered with profanity (which I didn’t mind).

It wasn’t until I finished the book and did some quick research that I found out why: Some of the stories in the collection had previously been published as stand-alone stories about this Yunior character that Diaz seems to be attached to. As such, the seven stories dealing with Yunior were told from different perspectives (first, second, and third) to the point where I was confused as to whether Yunior was the narrator. One story that had nothing to do with Yunior but still dealt with the themes of love and infidelity is “Otravida, Otravez,” told from the perspective of a woman.

This Is How You Lose Her is a disjointed collection of stories about a character who is hard to root for. Crass in speech with a lot of machismo, Yunior regales us with stories of his many sexual conquests while presenting us with a perspective of Dominican culture that some may find stereotypical and depressing. While I can recognize Junot Diaz as a writer with a distinctive voice and style, this book did not adequately reflect his capabilities. This “novel,” though a quick read at 217 pages, felt like it wasn’t quick enough.

This review and others are also available on my blog.