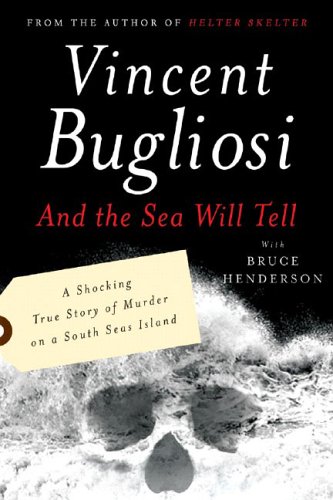 Vincent Bugliosi sure did think a lot of himself. And he had every right to–he’s the guy who put Charles Manson away. He won almost every case he tried, whether as prosecutor or defense attorney. He wrote Helter Skelter, a fantastic book that enthralled and terrified me in equal measure. And the Sea Will Tell, however, is a bit of a different story.

Covering the Palmyra murders case, the book starts off promisingly enough with the tale of two couples sailing separately to the distant island of Palmyra, both hoping to find it deserted for different reasons. We already know that at least one of these four people will meet a bad end–we just don’t know who, or why. Bugliosi effectively builds dread throughout the first half of the book, as we meet Buck, Jennifer, Mac and Muff. He recounts Buck’s menacing behavior and criminal record, Muff’s terror at the thought of sailing to Palmyra and living there, and later the low current of antagonism running through the relationship between Buck and Mac. This antagonism appears to be headed to a horrifying crescendo–but, what, exactly, happened between the two couples?

No one knows. Years later, a skull is found on Palmyra, identified as belonging to one of the four. The other couple are arrested and tried for murder. The rest of the book follows as Bugliosi is hired to defend the female member of that couple, and describes the court case. Here’s where the book lost all the momentum it had built. Bugliosi, so skilled at painting a riveting picture of tension and foreboding on the island, dedicates page after tedious page to detailing exactly how the defense built their case, and exactly why each decision was made. And when I say each decision, I mean each decision. Entire chapters are given over to testimony on whether or not this boat or that one was seaworthy, whether this couple or that couple kept a log of their journey–doubtless items of great importance to the court case, but less vital to this book. All these piddling little details are leading to something, all right, but it’s not the moment you’re hoping for, where the truth is revealed. Instead, it’s Bugliosi’s closing summation, to which he dedicates multiple chapters in order to quote it extensively. By this point I was skipping whole pages and skimming others.

Bugliosi is clearly fascinated by the law and judicial process, but it’s far less interesting for the rest of us. He also comes off as a huge fan of himself (this also came across in Helter Skelter, I thought, but not to this degree). The man complains, multiple times (!) that the defendant failed to thank him for defending her until several months after the trial was over. The prosecutor is portrayed as a dull, monotone speaker, while Bugliosi paints himself as a thrilling orator. By the end I was heartily sick of the man.

The first half of this book is pretty good, if you’re a true crime or mystery fan. I’d recommend reading that and then heading to Wikipedia to find out the result of the trial.