I first heard of Caroline Paul because she was one of the first women firefighters on the San Francisco Fire Department, and she wrote a book about it (Fighting Fire, 1998). I bought the book, planning on reading it, but haven’t gotten to it yet. Once I went through my own fire department academy, I wasn’t too keen on going through the experience again–even through the eyes of another. But then I heard of another book by Caroline Paul, and I was curious enough to read it right away. The Gutsy Girl: Escapades for Your Life of Epic Adventure (2016), illustrated by Wendy MacNaughton, seems to be geared toward tweens and middle school students.

The Gutsy Girl is a wholly positive book that encourages young girls to get out of their comfort zones and be adventurous. Although Paul sometimes defines getting out of your comfort zone as doing anything that scares you, including raising your hand in class, the book is focused on outdoor and physical adventures. In addition, the book is a celebration of groundbreaking women in a number of fields. Paul uses stories and role models to say, “look at all this cool stuff women and girls have done, you can do it too, just be confident and don’t worry about failure.”

The book is split into chapters with short stories of Paul’s life interspersed with small blurbs of inspiring girls and women today and throughout history. At the end of each chapter are some adventure tips and ideas for journaling. The tone is lighthearted and encouraging. It is clear that Paul is very aware of some of the factors limiting women today and is doing her best to encourage young women to succeed in areas often dominated by men. 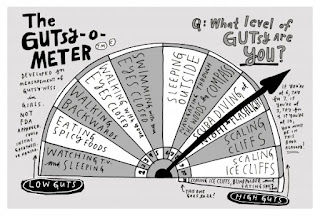 Paul’s stories about her life are more about teaching lessons in overcoming fear and failure than crowing about her own accomplishments. However, reading between the lines, it is obvious that Paul is a remarkable person who has done a lot in her life. She rowed competitively at Stanford(?), went paragliding in South America as a teenager, was invited to be on the National luge team, and broke down boundaries as a woman firefighter.

My favorite part of the book was just reading about Paul’s life. She is a clear, entertaining writer. The small blurbs of inspiring girls and women interspersed throughout the book were sometimes distracting, but they also added a new dimension that was helpful overall. These inspiring women ranged from Ashima Shiraishi, a 15-year-old New Yorker and one of the best climbers, male or female, in the world right now, to Annie Taylor. Annie Taylor was the first person to survive going over Niagara Falls in a barrel. Even more remarkable was the fact that this was 1901 and Annie Taylor was sixty-three years old. Desperate for money, she designed her own barrel and survived. Unfortunately for her, the press was not interested in an old woman going over Niagara Falls, and it wasn’t until a man did the same feat ten years later that he got the attention she deserved.

I appreciate Paul’s writing, and I appreciate that Paul is trying to inspire girls to not let fear or boundaries stop them. It’s hard for me to imagine what I would have thought of this book if I had read it in middle school–if it would have inspired me. I was a very different person back then. I hope that a young girl can read it today and be inspired by the many possibilities out there.