I almost feel like I should knock on wood, because surely G. Willow Wilson can’t keep this up? Writing an emotionally affecting, funny, superhero comic that manages to transcend the limitations of its genre (mostly neverending mashups with other series, forced crossover storylines, etc.)

The only “flaw” I can consistently identify in this series is that it sometimes betrays its other genre (young adult) by leaning a little too far into some of those tropes, getting a teensy bit “messagey.” But the messages are always so good and right, I honestly don’t think I even care (see: the issue that opens this book, centered on Kamala getting out the vote). For that matter, the rest of the trade centers on a story that boils down to Kamala saving the world by having everyone literally just being nice to each other.

Aside from the first issue, the rest of this trade has Kamala fighting new villain Doc.X, which is a name I think I love. I think Doc.X is actually a really successful villain for Kamala to fight. Not only does he actually represent a very real thing that we face in our world, but Wilson is able to mine that threat for lots of juicy story tidbits relevant to both Kamala’s life and the city she lives in. Also, once again, Wilson manages to keep the villain at a manageable and reasonable threat level. Kamala doesn’t need to be saving the world from bigger and bigger threats all the time. It’s the emotional stakes that really matter, and I think that’s why this comic does continue to be so successful.

Plus there’s a scene in it where Kamala outs herself to her gaming guild as Ms. Marvel, and her guild practically shits their pants. 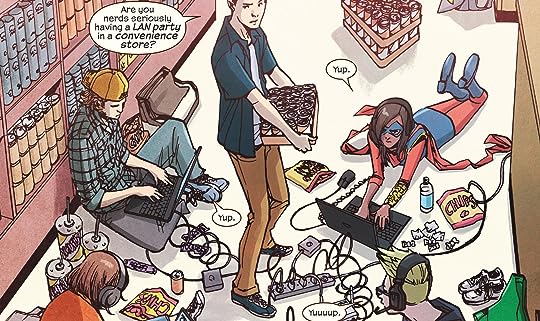 The trade closes with a Bruno check-in, which I really appreciated. The deterioration of his and Kamala’s relationship last book really shot an arrow straight through my gut, because friendship :( So it’s nice to see him on the road to recovery, and even nicer to see him starting to make something of himself in Wakanda. I’ll also be honest here. I read the first volume of Ta-Nehisi Coates’ run on Black Panther and was not impressed. I actually think Wilson does a seriously good job considering the limited amount of space she’s given (one issue), fleshing out that country. I would like to see her version of Black Panther, honestly, but that would take her away from Ms. Marvel, so I guess all in all, I’ll live with things the way they are, and just enjoy this one issue.