beforeheader
The Book Bingo Reading Challenge is Here
> Genre: Fiction > What if she doesn’t want to remember? 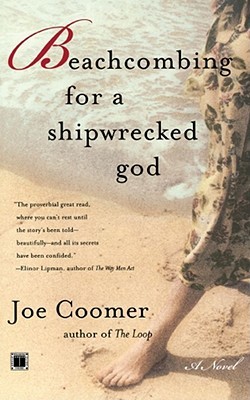 You know how sometimes you keep trying to read a book, but you aren’t feeling it so you put it down indefinitely and then when you pick it up again, you can’t believe how much action there is and you just plow through the end as if you’d never put it down?

Beachcombing for a Shipwrecked God was like that for it. It’s the first book I started reading in 2017, and one of the last that I finished. I don’t think I read a single page of it between March and December. I just couldn’t bring myself to do it.

I didn’t understand why the characters were hanging around not doing much, just getting to know each other. The writing was lovely, and as a meditation on grief, I appreciated the concept.

But I swear to you, the first half of the book is just the three main characters being with each other. And I did like the portraits that were being painted, I just didn’t understand why they were all there?

And then, in the back half, it became Action City, USA. There are simultaneous inciting incidents, and then suddenly these women, who we know intimately, are on the move and it’s thrilling and tense.

And I loved it. I leaned in. I was so excited for what they were doing and what was coming next.

Unfortunately, it was ultimately a little wobbly on the dismount. No spoilers, but definitely disappointment in the end.

So, if I were to break this book down, it would be:

And fundamentally, can one love a book for its middle third? If you ask me, we deserve more consistency as readers. I’m not mad about this book, but I’m vaguely disappointed, and can’t recommend.