beforeheader
The Book Bingo Reading Challenge is Here
> Genre: Fiction > And Then There Were Satanists … The Legacy

The Legacy, by John Coyne, is a mixture of an Agatha Christie whodunnit, as members of a house party are knocked off one by one, and an occult thriller. It’s not always clear how much of the menace is due to dark magic or just plain old greed, as six people have been elected to inherit a legacy — of vast wealth, property, and possibly, supernatural power. Coyne wrote the novel as a tie-in to the successful film starring Katharine Ross and Sam Elliot (and The Who’s Roger Daltrey in a small role). He wrote a number of other horror novels before switching to golf novels, which is his current genre.

I liked the film when I saw it as a kid, so thought I’d give the book a try. It’s a good read for a few spooks and thrills, but much of it seemed very dated — especially how the relationship between the main couple, Maggie and Pete (Ross and Elliott in the film) is handled. It was hard not to roll my eyes while Pete took fragile Maggie in his strong arms again and again. I remember Katharine Ross being pretty kick-ass and spunky in the movie, so I put those scenes down to the author’s own attitudes about the sexes and their roles. There were a few occasions where Coyne could have added some more background, as to why Maggie and Pete found themselves at an English palatial estate, and how Maggie’s family tree might be a factor. But after one fevered dream sequence that Maggie has halfway through the book, he seemed to drop it.

So, honestly, there is not much to be gained by reading the book versus seeing the original film, which is just some cheesy fun (complete with a Sam Elliot shower scene — bonus). That’s the way to go, in my opinion. 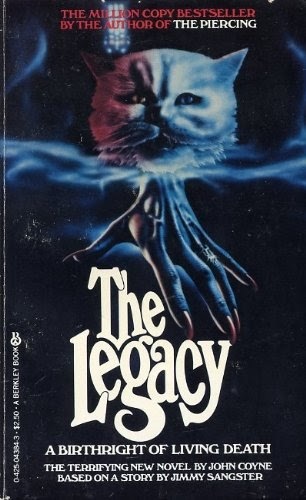