> Genre: Biography/Memoir > I wish this book had never come to me (or: I’ll take “Lazy, Unfunny Review Titles for Lazy, Unfunny Books” for $200, Alex) 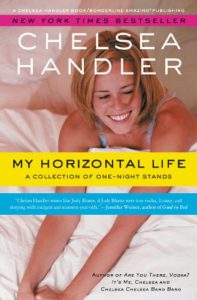 I chose Chelsea Handler’s My Horizontal Life: A Collection of One-Night Stands for my Alabama Pink square, thinking I could breeze through it, laughing a bit along the way and then completely forgetting it as soon as I finished, but man, this book was so bad that I couldn’t get past the fifth chapter. I’d already powered my way through some terrible books this year, and the world is just too crappy a place right now, so I gave myself permission to put this one down without finishing. It’s poorly written. It’s juvenile. It’s aggressively offensive and provocative in the “LOOK AT ME I’M EDGY” school of comedy that’s become all too familiar and tiresome.

Within the first five chapters, she:

That last one is what broke me. I’m still ashamed I even got that far.

I get that this is all part of her schtick, turning the tables on men by bragging about her own sexual exploits, saying awful things but then deflecting her awfulness with self-deprecation. I get that this was published “way back” in 2005, so maybe we shouldn’t hold her to our “lofty” 2018 standards, but what’s garbage now was garbage then, too.

I also get that humor is subjective, but not once did I crack a smile, let alone laugh. If you’re going to be EDGY, then at least be funny. Better yet: be funny and subversive. Chelsea Handler is neither of those things, and this book is not worth any more of my time.