I recently finished watching The Haunting of Hill House on Netflix. But it is still with me. It was at times an uncomfortable watch, but it also may be one of the best things I’ve seen in a long time. It can’t really be called an adaptation of the immortal Shirley Jackson novel. That classic book could be considered more of a jumping-off point for this, an original, deeply-felt horror story. 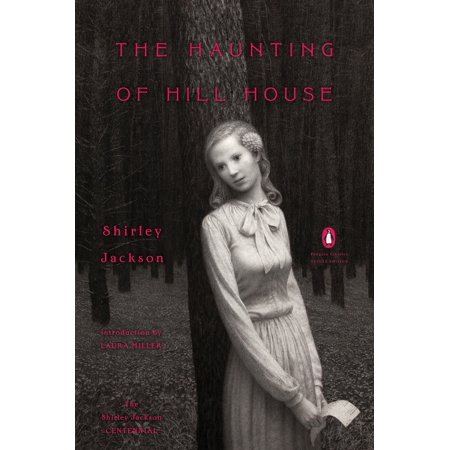 The original novel, first published in 1959, concerns a group of disparate people who have come together to study a house with a bad, even evil reputation: the organizer of a paranormal study, Dr. Montague; Luke, a descendant of the original owners of the house; Theodora, who seems to have run out of fun things to do and is there on a lark or a dare; and the fragile Eleanor, who is ready for something, anything, to happen in her life. The house’s only two caretakers, a cook and her husband, adamantly refuse to stay in the house after dark — if only the quartet paid closer attention to that fact …

Jackson’s prose is poetic, and helps to weave a spell around the characters and the reader as they follow Eleanor through the halls of Hill House.

No live organism can continue for long to exist sanely under conditions of absolute reality; even larks and katydids are supposed, by some, to dream. Hill House, not sane, stood by itself against its hills, holding darkness within; it had stood so for eighty years and might stand for eighty more. Within, walls continued upright, bricks met neatly, floors were firm, and doors were sensibly shut; silence lay steadily against the wood and stone of Hill House, and whatever walked there, walked alone.

The mini-series uses many of the same character names but makes them a family — a family held together, but also blown apart, by grief and madness. Interesting moments in the book are given a new twist on film. 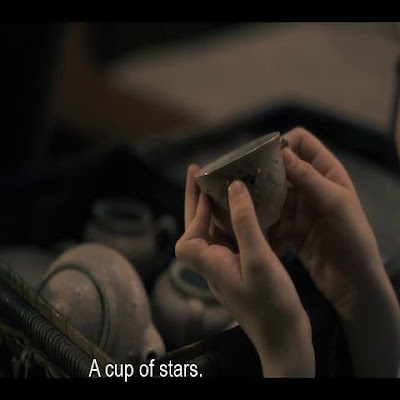 Eleanor looked up, surprised; the little girl was sliding back in her chair, sullenly refusing her milk, while her father frowned and her brother giggled and her mother said calmly, “She wants her cup of stars.”

Indeed yes, Eleanor thought; indeed, so do I; a cup of stars, of course.

“Her little cup,” the mother was explaining, smiling apologetically at the waitress, who was thunderstruck at the thought that the mill’s good country milk was not rich enough for the little girl. “It has stars in the bottom, and she always drinks her milk from it at home. She calls it her cup of stars because she can see the stars while she drinks her milk.” The waitress nodded, unconvinced, and the mother told the little girl, “You’ll have your milk from your cup of stars tonight when we get home. But just for now, just to be a very good little girl, will you take a little milk from this glass?”

Don’t do it, Eleanor told the little girl; insist on your cup of stars; once they have trapped you into being like everyone else you will never see your cup of stars again; don’t do it; and the little girl glanced at her, and smiled a little subtle, dimpling, wholly comprehending smile, and shook her head stubbornly at the glass. Brave girl, Eleanor thought; wise, brave girl. 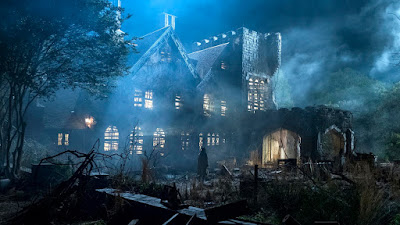 No Human eye can isolate the unhappy coincidence of line and place which suggests evil in the face of a house, and yet somehow a maniac juxtaposition, a badly turned angle, some chance meeting of roof and sky, turned Hill House into a place of despair, more frightening because the face of Hill House seemed awake, with a watchfulness from the blank windows and a touch of glee in the eyebrow of a cornice. 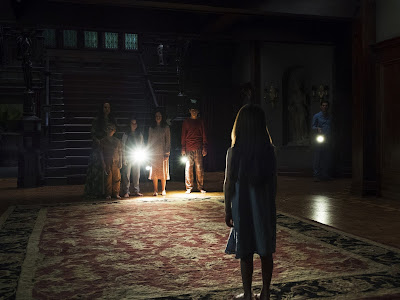 The best horror is based on real-life fears. Slasher and vampire movies are tied to sex. Zombies and ghost stories to death. But The Haunting of Hill House mini-series takes a scary-enough-on-its-own ghost story and ups the ante by becoming a meditation on madness, illness, and grief.

Art provides one of the best outlets for grief and loss. When my father died in 1993 I was drawn to Sting’s 1991 album, The Soul Cages, where many of the songs touched on what he had experienced after his own father died. Comedy movies that we had shared together while he was alive, like 1991’s What About Bob, were also a balm. My mother died two and a half years ago and I am still struggling to come to terms with what that means and what it is like to live in a world with such a vast void — the invisible wall between life and death that my parents represented is now gone forever.

My mother had dementia, so it was a slow, heartbreaking decline to at first care for, and then helplessly witness. As I watched The Haunting of Hill House I recognized so many of my own feelings on display by the Crain family siblings — fear, grief, guilt, even loathing, of family members’ conditions — possible madness, drug addiction, suicide. In this version Hugh and Olivia Crain (Henry Thomas and Carla Gugino) move their young family of seven into the dilapidated Hill House on the early 90s — with hopes to refurbish and flip it and make their own family fortune. But Hill House seems to already be inhabited — by ghosts — who menace the family — especially its youngest and most vulnerable inhabitants, the twins Luke and Nell. The story flashes forward to the present, and the estranged adult siblings and their father (Timothy Hutton) who are haunted by that summer and what happened there.

The Haunting of Hill House plays with truth and belief. If you look closely, there are things that live in the shadows — or are there? Are we watching the fractured break-down or haunting of Olivia? There are hints that her madness was already there — the way she doesn’t seem to notice or react to her children being terrorized — but how one reads that behavior can depend on one’s own perspective or reading of the story. Like a Choose You Own Adventure book, I think the filmmakers have left interpretation open-ended for the viewer. Shirley Jackson treated Eleanor in a similar fashion. Did she see what she thought she saw?

For me The Haunting of Hill House is a powerful meditation on illness and grief. And hope. Olivia’s illness and death may have splintered, even destroyed her family for a time. But when they go back to revisit Hill House and the events that led to her death they are also able to close that chapter of their lives and move on. There is light to be found in the shadows of grief. There is life after someone’s death.

All quotes from The Haunting of Hill House, by Shirley Jackson, 1959.