> Genre: Mystery > Probably my least favorite of these books.

I liked this, I did. But the first half was just an extended Holmes story (a pretty good one!), while the second half was basically pointless. I don’t think this should have been a full length novel. The content of the story just doesn’t justify it.

The Valley of Fear was published in full in 1915 (after being serialized in The Strand of course), so by this point, Conan Doyle had been writing the character for almost thirty years. (This was also around the time Conan Doyle started getting super into spiritualism, and about five years before he started believing in fairies–worth a read on that link, btw). So just for context, he was getting older, a little tired of the character, but probably liked all the money. So why not? 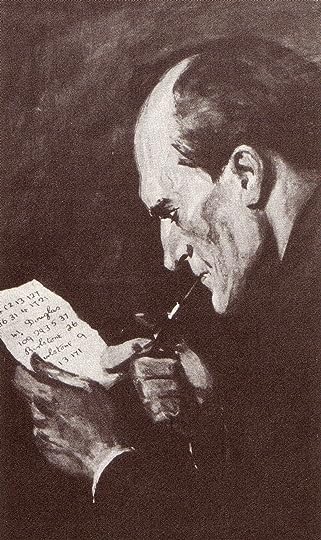 Anyway, this novel mimics a lot of things Conan Doyle had already used in previous Holmes stories and novels, most notably, the structure of the first Holmes outing, A Study in Scarlet: Holmes and Watson are on the trail of the murderer in part one, they catch him, and then in an extended part two, we get the backstory of the murderer which delves into aspects of American society that Conan Doyle seemed to have been fascinated with. Here, it’s organized crime; in Scarlet, it was Mormons. (Most Doyle scholars agree he was a bit obsessed with the more “exotic” aspects of American life. So there’s that.)

The first half I liked the best. Holmes is just clever and he solves a murder, and the atmosphere was fun (it takes place in a castle with a moat!). It was like a slightly longer Holmes short story. It’s at this point, when you think you’re done and your emotions are ready for it to be over, that you then have to tuck in and read/listen to an entire second half full of characters you don’t really care about. Or at least, I didn’t (obviously). That whole incident could have been summed up in about 1/8 of the space and time.

The ending was suitably creepy. I sort of rolled my eyes that he invokes Moriarty (this takes place before Holmes’s ultimate confrontation with him in “The Final Problem”). Like, okay, you liked Moriarty the first time, here he is again! Except he’s more of a menacing presence than anything else. I wonder if this story is where Moffatt and Gatiss got the idea to thread Moriarty through the first season of BBC Sherlock before he actually shows up. Also, I could swear that Watson didn’t know about Moriarty until the events of that story, but here he learns about him way before those events. Continuity! Shrug.