> Genre: Children's > Okay except for the font 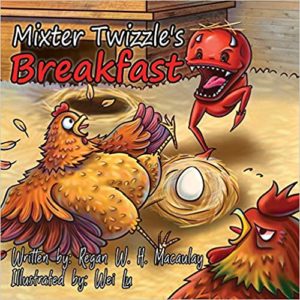 I was drawn to this because of the cover.  We have a little demon dude and some very disgruntled chickens.  This little demon friend only has two limbs, and they appear to be sometimes legs and sometimes arms.  Wait, they mention toes, so I guess they’re legs. We have some fun little hamster and bunny and butterfly friends by the text, so that’s fun.  They’re just chillin’ out. He also talks to himself, kind of like Gollum in Lord of the Rings.  It’s a bit creepy.  Oh, wait, it seems that his heart has a separate voice.  Still creepy.

Mixer Twizzle likes to steal and eat chicken eggs.  The chickens are not pleased with this. (Although I have found that other than the actual stealing process from underneath a sitting chicken, they don’t really care what you do with their eggs.)  As you can guess with a lonely egg-stealing monster who steals eggs, eventually one hatches. Now it is implied that he is sitting on the egg for a very brief time. If he’s been stealing all of the eggs for a while, then it would quite a while (21 days!) for that egg to hatch into a chick.  So either a chicken had been sitting for 21 days already and he missed that egg previously, or his magic demon powers hatched out the egg at an advanced rate.

I like the illustrations, and the story is kind of cute, but I’m not a fan of the font chosen for the text.  Because it’s Comic Sans, or some variety thereof. And sometimes it has an outline and shadow, so it looks like Comic Sans plus Word Art, and that’s just nope, even for a children’s book.

I received this book at no cost in exchange for an honest review.