> Genre: Fiction > Don’t try to make me grow up before my time

Little Women (1869) by Louisa May Alcott is another one of those books that I’m not sure how I missed reading in my childhood. I read so much, and Little Women is such a classic that I’m surprised I did not get around to it at some point. So, I finally picked it up for the first time because it was on my list of 50 Books Every Woman Should Read Before She Turns 40.

Now, before reading the novel, all of my knowledge of this story came from the 1994 movie adaptation with Winona Ryder, Susan Sarandon, and Christian Bale. I remember being shocked and disappointed that Jo did not end up with Laurie, although she seemed happy enough at the end of the movie. I also liked the sisters and the general story, so I was looking forward to finally reading the book. (In searching online, I just discovered a new PBS version of Little Women available on Amazon, which I will have to watch soon.) 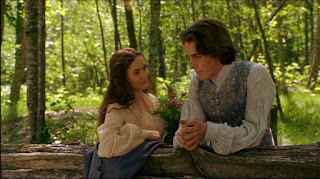 I’m assuming that most everyone is familiar with this story. Four sisters: Meg, Jo, Beth, and Amy come of age during the Civil War. Their father is initially absent because of the war, and they are raised by their wise, saintly mother. The sisters all have distinct personalities and struggle with missing their father, growing up poor, and sisterly squabbles. Their rich neighbor’s grandson, Laurie, befriends them and becomes almost part of their family. Jo, the spirited tomboy of the family equals Laurie for energy and spirit, and the two are best friends. Beth is sweet and sickly, and Amy is artistic and accomplished (once she grows out of her bratty phase). Meg is the eldest child. She marries first and some of her adult life is captured in the book.

Little Women is a classic for a reason. The interactions–and especially the fighting–between the sisters feels very real and relatable. The characters are memorable and likable, although far from faultless. The girls are also good role models, all striving to become better people and live their best lives. Their mother is the picture of love and patience as she cares greatly for her family and teaches them life’s lessons with a gentle hand. In addition, Jo is a tomboy and not particularly beautiful. She runs and writes and does not conform to society’s expectations. I just recently saw J.K. Rowling in an interview where she said that Jo March was a character who helped her through her nerdy, awkward adolescence. It’s simply amazing how much influence this book has had, and it made me cry at least once.

On the other hand, when I read this book, I already knew all of the major plot points from the movie. So the only part of the book that was new to me was what seemed like a large amount of preachiness. Every scene had some kind of life lesson spelled out in detail. And little religious lessons popped up left and right as I read. I think I would have suffered through the preaching more easily, if I had not already known the plot, but I often found it tedious.

Louisa May Alcott was known as an abolitionist and feminist. She apparently did not want to marry Jo off initially but caved to popular demand. However, much of her writing still rubbed me the wrong way. I guess it is not surprising that a feminist in 1869 and a feminist in 2018 would not necessarily be the same. A lot of the descriptions of “womanly,” “feminine,” and “innocent” rubbed me the wrong way and felt stifling. In addition, her descriptions of the Irish and the Jews were sometimes troubling. Nevertheless, there is a long speech where her mother states that she just wants her children to be happy and marriage should not be their end goal–which was probably pretty progressive at the time.

Now that I’ve had some time to rest from the preaching, I can really appreciate the timeless story of four sisters growing up with some hardship and lots of love. I’m looking forward to watching the PBS version.

You can find all of my reviews on my blog.