As an attorney, one of the most fun things I get to do is put on my “Attorney at Law” persona and advocate on behalf of people being taken advantage of. I get to slap a state bar number at the end of a letter and get people’s attention. Because of that, I think there’s an assumption that I like to fight. In addition to being an attorney, I’m also a mediator, aka “peacemaker”. As a mediator, I try to step into the lives of strangers in conflict and help them find a way out. Also relevant – a lot of my career has been spent in politics. All of those have mixed together in my mind a kind of philosophical smoothie of how to best handle conflict interactions and how to bring meaningful healing to broken relationships and situations.

Unfortunately, it’s hard for me to articulate what I believe, and so when I use words like “civility” and “agitator” people think I mean something different than what I think I mean. Maybe I don’t know what I mean. Adam Kahane’s Power and Love artfully explains how both strong advocacy and open-armed love work together as one, and he articulates specifically how we need both for meaningful social change. The book helped me clarify and raise my own thinking on this relevant topic. 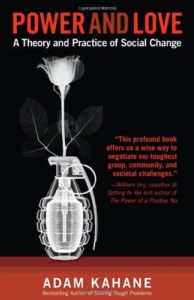 Utilizing Paul Tillich’s definitions of power (“the drive of everything living to realize itself”, with increasing intensity and extensity”) and love (“the drive towards the unity of the separated”), Kahane draws on his experience consulting in leadership and conflict situations around the globe to show how the two work together. I believe he became enamored with this idea because MLK was into Tillich. In Kahane’s own words:

Our power makes our love empowering instead of sentimental and anemic. Our love makes or power unifying instead of reckless and abusive. Our power and our love both become fuller and more generative, and the two intersuffuce and become one.

The book is both philosophical and practical in nature. Kahane lets you learn from his mistakes, as well as from some successes. If you care deeply about healing the world, I’d consider this short and quick read.