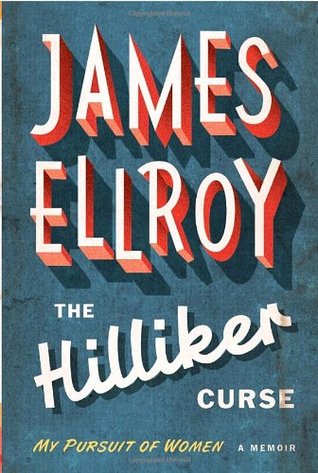 I am five reviews behind because I HATED this book & didn’t feel like putting the time into a review. So…does that count as a review?

If you can read the excerpt above without rolling your eyes, then maybe give this one a shot. Personally, I spent a lot of time rolling my eyes during this one.

James Ellroy’s mother was murdered in 1958, when he was 10 years old and just shortly after he wished her dead (his parents were in the midst of a rough divorce, and he was siding with his father at the time). Obviously, this is the kind of thing that can mess you up as a human being. He’s made a career of his attempts to atone for his behavior, mostly by writing about dead women, real or imagined (his first big hit was his novel about The Black Dahlia).

He spends this autobiography attempting to justify his behavior outside of his writing — his drinking, taking drugs, chasing women, etc. I mean, maybe I should have expected what I got here. After all, it is called The Hilliker Curse: My Pursuit of Women. But in addition to the obnoxious material, his writing style made me crazy. It’s all short, choppy sentences and random imagery. I did not like it one bit!