beforeheader
The Book Bingo Reading Challenge is Here
> Genre: Fiction > I want my 25 cents back 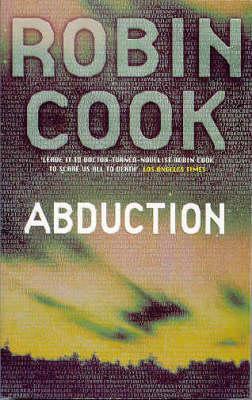 My best friend introduced me to Robin Cook in sixth grade, and we both loved his medical thrillers. I found some of his books recently for super cheap (a quarter each!) at a rummage sale, and couldn’t resist grabbing them all. I sent her a snap of Abduction when I started it, and she warned me that it doesn’t hold up well — but I’m pretty sure I never read it the first time around (it came out in ’02, and I’d moved on from Cook by then I think). So I went for it. Unfortunately, her review was an understatement, to say the least. This book was so, so bad.

Abduction, first published in 2002, is NOT a medical thriller. Instead, it’s about a group of scientists drilling for oil in an underwater trench, who get abducted by “primary humans” — an offshoot of humanity that created an underwater civilization thousands of years ago. These primary humans abduct our fearless heroes — a marine scientist of some sort, a military commander with a stick up his ass, the wussy company CEO, and two (misogynistic! homophobic! racist!) divers — all in an attempt to find out more about the drilling. First they spend a couple days showing them around, where we learn just how beautiful magical wonderful this place is —  no violence, clones do all the hard work (and they really like it, guys!), people live for hundreds of years and COME BACK AFTER THEY DIE. We get winky allusions to Atlantis and other times over the millennia that the primary humans have made contact with us lowly secondary humans. Then one of the divers murders a guy for making a pass at him, and it all goes to hell.

Guys, it’s just so very bad. The atrocious dialogue. The terrible story-telling. The whole thing is just a couple of guys walking the drilling group around, showing them fancy shit and refusing to answer questions. This goes on for like, 300 pages. 300 pages of “Oh, your people still reproduce sexually? Haha, how quaint!”. Meanwhile the butch divers keeping calling everyone fags and trying to get laid (in Cook’s defense, we’re not supposed to like these guys — but it’s such an incredibly heavy-handed way of going about that), while the military guy yells “it’s a trap!” about a million times. It’s just awful, and I’m going to have to reread Mutant to get the taste out of my mouth.