beforeheader
The Book Bingo Reading Challenge is Here
> Genre: Fantasy > Kamala survived Secret Wars and is now just as awesome as before.

How does this series continue to be SO GOOD. It is the only superhero comic I read that doesn’t allow the larger events of the Marvel (or whatever other comics) universe to completely mess with the narrative it’s trying to tell. Kamala is always Kamala. I never feel discombobulated when I’m reading about her, even if I’ve missed issues where she’s popped in to other superheroes stories, or there’s been some sort of crossover event, like Secret Wars/Battleworld.

No idea how that mess all got solved, by the way.

Things seem to be back to normal in Jersey City. Well, relatively. Loki’s lightning golems are still hanging around, because they seem to like New Jersey I guess. 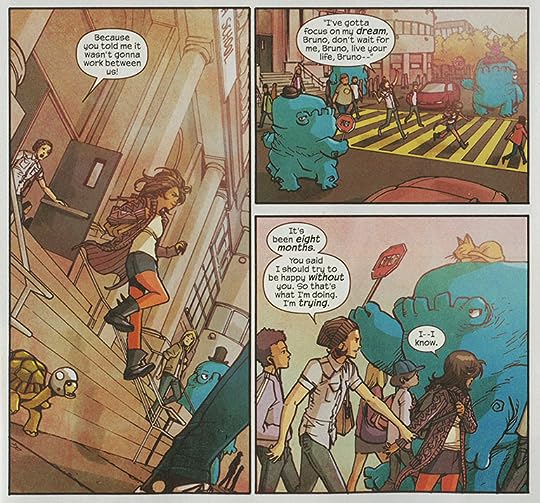 It’s been eight months, as you can see, and Kamala is an Avenger now. She has Iron Man’s personal cell phone number, and he helps her with her math homework. Spider-Man is her pal. Captain America (the Sam Wilson variety) intimidates the hell out of her. (Thor is Jane Foster.) Vision is like, ‘sup. AVENGERS ¯\_(ツ)_/¯

But Kamala is starting to fray at the edges. Her commitments to her family, to being a “super famous” superhero (as opposed to the newcomer nobody she was before), to her schoolwork and to her friends . . . she doesn’t have time for it all, and all of it is suffering. 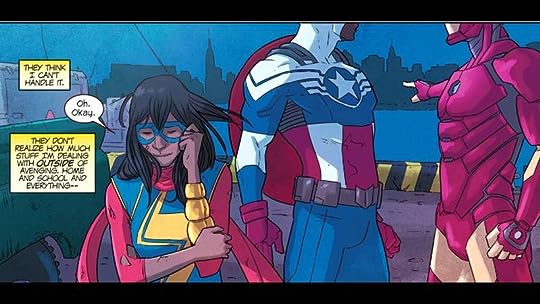 Not only that, but she’s finding there are other perils to being famous. She’s finding that her image is not quite her own. Now that it’s out in the world, anyone can do or say anything about her, and there’s largely nothing she can do about it. Also, her best friend Bruno, who we last saw confessing his love for her on a roof top, is now dating a girl called Mike, and Kamala is the very last one to find out about it.

This trade is broken into two stories. The first involves someone using Ms. Marvel’s image to sell a gentrification project that is ruining Kamala’s neighborhood and turning her neighbors against Ms. Marvel (of course there is also something villainish going on as well). The second involves Kamala trying to take the easy way out of her time management issues, and Bruno going all scientist, and well . . . things go badly. 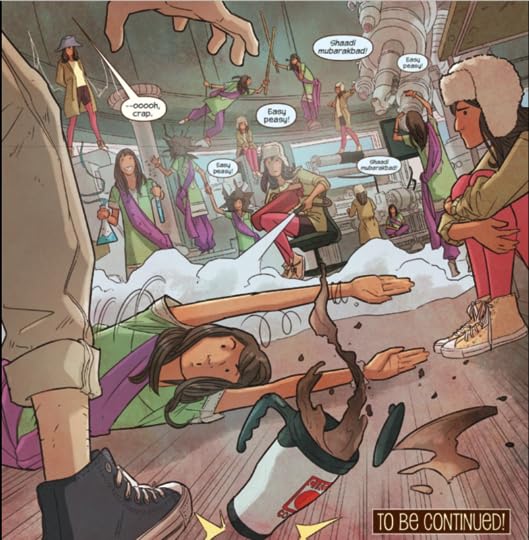 G. Willow Wilson is just the master of this story. The characters THE CHARACTERS. I love love love Kamala, but all her friends and family are great, too. She introduces two characters in this one–Mike, Bruno’s girlfriend, and Tyesha, Aamir’s fiancé–who you end up really liking (I especially love Tyesha).

The way she navigates the relationship between Kamala, Bruno and Mike is really nice as well. Kamala is more upset that Bruno didn’t tell her about Mike than anything else, and she and Mike end up becoming friends. No stupid fake girl drama here. And I just cracked up endlessly at everything involving Aamir and Tyesha’s courtship/engagement. Especially their families interacting, and Tyesha being a huge nerd. 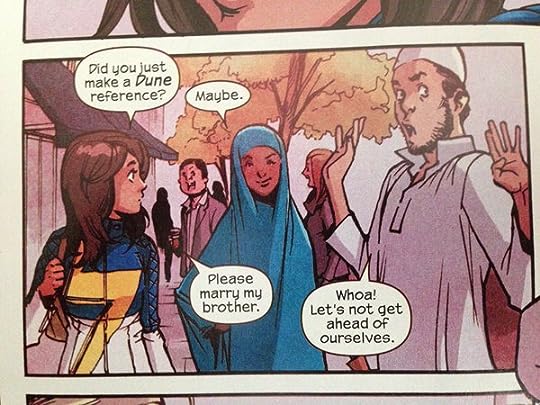 Long story short, Ms. Marvel is the best, and if G. Willow Wilson ever stops writing her, I will cry.