beforeheader
The Book Bingo Reading Challenge is Here
> Genre: Fiction > “You can no more read the same book again than you can step into the same river.” 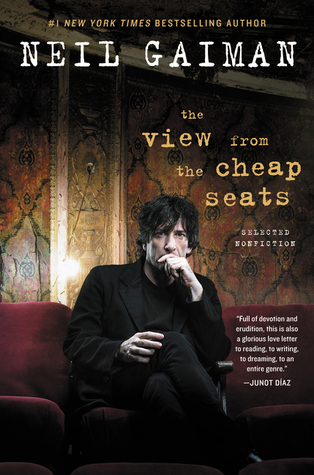 I am a huge fan of Neil Gaiman, and have read pretty much everything he’s ever written. Well, now I really feel like I’ve read everything — this collection of every speech he’s ever given, every introduction he’s ever written, along with multiple interviews from his journalist days feels pretty inclusive. It’s not the kind of book you can sit down and read all at once, but over the course of a week or so, it’s a nice glimpse into a lot of things that Gaiman feels passionately about.

“We who make stories know that we tell lies for a living. But they are good lies that say true things, and we owe it to our readers to build them as best we can. Because somewhere out there is someone who needs that story.”

“Literature does not occur in a vacuum. It cannot be a monologue. It has to be a conversation, and new people, new readers, need to be brought into the conversation too.”

The intros/speeches/interviews that I enjoyed most involved people & stories that I’m already familiar. I particularly liked reading about Stephen King, Terry Pratchett, and Douglas Adams (god, I miss Douglas Adams and I love hearing stories about him). But I also liked when Gaiman introduced me to writers that I’ve never read, or even heard of. I definitely added some titles to my TBR. It reminded me a lot of King’s Danse Macabre in that way (Gaiman himself references that book a few times), in that you could really view the whole thing as a list of recommended reading. Since we apparently have similar tastes, I’m happy to read anything Gaiman recommends.