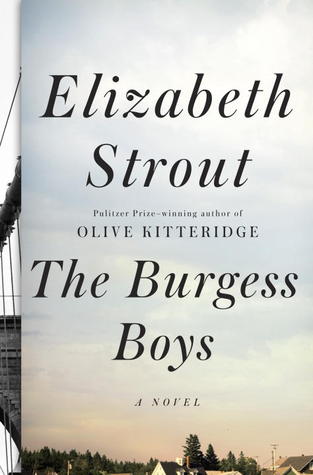 This is the second Elizabeth Strout book that I’ve read (the other being Olive Kitteridge), and while I cannot deny her gift as writer, I just do not enjoy her novels. The biggest issue is, she doesn’t seem to want them to be enjoyable. Like Kitteridge, The Burgess Boys is filled with unpleasant characters and terribly sad events.

“You have family”, Bob said. “You have a wife who hates you. Kids who are furious with you. A brother and sister who make you insane. And a nephew who used to be kind of a drip but apparently is not so much of a drip now. That’s called family.”

When they were very small, Jim, Bob and Susan Burgess lost their father in a freak accident caused by Bob. Since then, the boys have escaped their small town in Maine to become lawyers in New York City, until Susan calls them home to help her son. What follows is a legal battle involving a growing community of Somali refugees in Maine, and the hate crime Susan’s son committed against them. Throughout the novel, Jim acts like a shit to Bob, whose life has basically fallen apart over the years.

Do you see what I mean by unpleasant?

Honestly, the only people I sympathized with throughout the novel were the refugees, and we barely get a glimpse of them. Strout’s writing style is crisp and elegant — she packs a lot of plot into a couple hundred pages. But I just could not get behind a single one of her main characters.