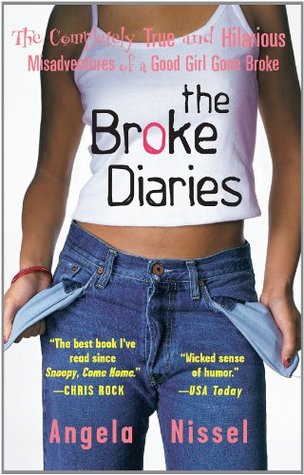 “Um, am I the only person who is walking around without underwear on today? I know I can’t be. This isn’t the first time this has happened to me, and I know if it’s happened to me more than once, it’s happened to someone else at least one time. I’m three quarters short of clean draws.”

Angela Nissel’s memoir The Broke Diaries apparently started out as a blog that she wrote in college, trying to find humor in a very crappy financial situation. Flat-broke in college, occasionally unable to find enough quarters to wash her underwear, she tells all here to her “diary”. It’s hysterical. I moved in with my now-husband at age 18, mostly because I was mad at my mom. We’ve been married for over 11 years now, so it worked out pretty well, but god we were broke. Angela tells a story here about losing half of a student loan check to overdraft fees — been there! Too broke to eat anything but Ramen for a week? Yep, done that, too!

This is the kind of book you want to read once you’ve made it to the other side, and look back and laugh. Good for Nissel for laughing during the hardest part.