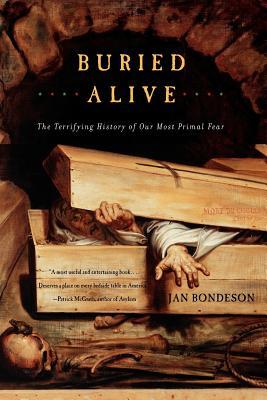 Okay, well I’ve had a run of some really great books, so I supposed I was due for a dud. This one starts out promising, but gets pretty boring pretty quickly.

Being buried alive isn’t a particular fear of mine (not that it sounds like a good time or anything), mostly because I intend to be cremated, plus modern medicine has advanced to the point where they’re going to be pretty certain that you’re dead when the time comes. For hundreds of years, however, medicine had no idea how to truly determine that a person was good and gone — and that’s assuming that a doctor was even present in the “final” moments. As a result, people occasionally were buried alive, and a whole phobia of that pervaded public thought — to the point of creating societies, protocols and inventions in order to prevent its occurrence.

To his credit, Bondeson is a good writer and I enjoyed his style enough to try to seek out some other non-fiction works by him. But he’s tethered here by his choice of material — while stories about being buried alive to exist, it’s really just the same few over and over, told in different ways by different people in different places & times. They all boil down to the same legends and tales, and he admits that in his work. So what starts out as an interesting read quickly becomes repetitive and dull. I did enjoy the discussions of how medicine changed over the centuries — like, when the stethoscope was invented and people put it to use to actually listen to heartbeats — and some of the stories were interesting. But overall, not a very compelling read.