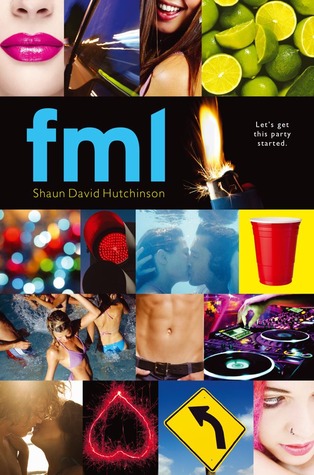 I had said after reading Punkzilla that I was getting too old for a certain type of YA novel — the ones full of partying and drinking and teens disobeying their parents. I don’t mind these in service of a good story, but they rarely are. Alas, I had already purchased fml, so I read the damn thing anyway and…yep. Punks kids all over my lawn.

So, fml uses the Sliding Doors approach of starting the story and letting it split into two alternate timelines. I’ve seen this work in movies and books, but I found it hard to follow here because the two storylines are SO similar. Basically, Simon has been in love with pretty girl Cassie since forever, and tonight he’s got a “chance” to hook up with her — she’s recently single, and throwing a party. She also seems to be suffering from some pretty serious emotional issues, but he’s ignoring that part. So at the beginning of the novel, he chooses whether to try one more time with her, or pursue a new relationship with a different girl.

What makes it confusing is he ends up going to the party and trying to hook up with Cassie in both storylines. There’s a lot of nonsense about it being a “swap” party (you bring something for admission, try to trade it up for other stuff), and of course there’s drinking and drugs and sex. Considering Simon’s two best friends are gay and in a relationship together (which I felt was handled respectfully by the author), Simon himself is pretty intolerant of other people. Overall, it’s just not a well-told story, or a story I could give a damn about.