With the new Wonder Woman movie coming out soon, I wanted to brush up on my knowledge of Diana. I happened upon this graphic novel in my library and thought I would pick it up. I’ll be honest, besides the 1970’s show, which I think is the only time Wonder Woman has had her own screen time, I didn’t know anything about her. 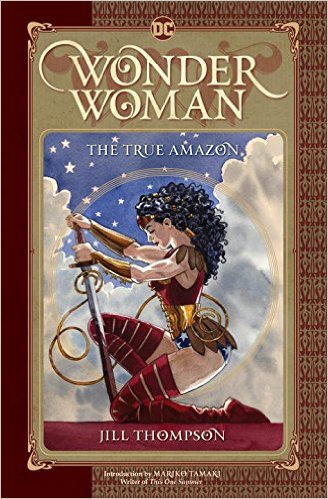 The graphic novel roots Diana’s story in ancient Greece and the war between Herakles and the Amazon’s queen. They end up moving to this awesome island and, no spoilers, Diana comes to be. She’s a demigod and no one seems to check her ego and curb some of her uber-competitiveness. Time passes and in one moment of tenacity, Diana makes a bad choice and has to pay the consequences by being exiled from the Amazons and doing good in the world.

I find this story intriguing because, one, I didn’t know any of this, and two, I didn’t realize that the early Diana was a jerk. Ok, maybe not quite a jerk, but she’s arrogant and it comes across as selfish and callous. I’m curious to see what Diana is like in the film and whether they are going to tell this story as well. There’s a lot of room left at the end of this book to explain some of the tools Wonder Woman has at the ready. This edition didn’t go into any detail about the tiara, the lasso of truth and the golden girdle. I’m hoping they will in the next volume.

Spoiler: I’ve just seen the movie and I’m happy to report that some of this origin story makes it into the film!  I’m grateful to have read this first because it gave me some context to what was happening.  In my opinion Gal Gadot’s Diana is waaaaaay better than the one in this graphic novel.