beforeheader
The Book Bingo Reading Challenge is Here
> Genre: Fantasy > “It Was A Pleasure To Burn” – Fahrenheit 451

The kid is in high school now, and although her getting older must mean that I, too, must be getting older (yikes!), there are a few perks. One of them is getting to watch her discover things, like some great books that I read when I was around her age. First up is Ray Bradbury’s Fahrenheit 451, a dystopian masterpiece. The story of a society, perhaps our own, that has decided that the ideas included in books are dangerous, seems eerily prescient. The floor-to-ceiling view screens that most of society, including the protagonist Guy Montag’s wife Mildred spend their days and nights glued to easily double for our large-scale flat screen televisions, tablets, and smart phones. And “The Family,” the drivel that appears on the screen every day is simply reality television and YouTubers. Fahrenheit 451 was first published in 1953. Montag is a fireman, whose job it is to burn books, but is growing increasingly disillusioned with his job and his place in society.

I listened to the audiobook version, narrated by Tim Robbins. He did a good job with the voices, and seemed to especially have fun voicing Mildred. Maybe it was hearing the book out loud, but  I was struck by how poetic Bradbury’s prose sounded, how rhythmic. I’m looking forward to introducing my daughter to some more Bradbury (and re-reading some myself). I’m impressed with this book as a first choice. I wonder what she will be asked to read next … 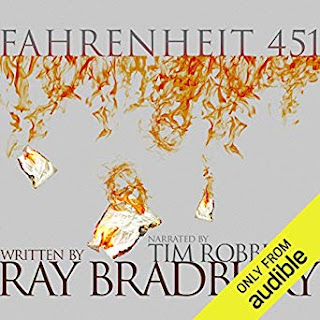 BTW — If you are interested in seeing a film adaptation of the novel, please avoid at all costs the recent HBO “adaptation” of the novel. It shared the title, but not much else. A huge disappointment. The Francois Truffaut film, starring Oskar Werner and Julie Christie, from 1966, is the way to go.