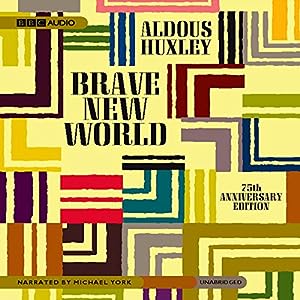 Brave New World fills the Not My Wheelhouse square, which means… BINGO! At last!

I didn’t actually know that much about Brave New World when I decided to read it (well, listen to the audiobook). I think I expected it to be more about struggling to bring down a dystopian system rather than struggling (or not) within a dystopian system. I didn’t expect a satire, and I didn’t really expect the end to be so hopeless. In a way, the satire aspect makes it even less my wheelhouse than I expected, but also probably more enjoyable.

My husband had read it before me, but didn’t give much of anything away. Even when at the beginning, I rolled my eyes and asked if Bernard (who I took an instant dislike to) was going to bring down the system through his love for Lenina, my husband just smiled and said “not quite”. This anecdote drives home the difference between what I expected (proto-typical ‘nice guy’ brings down the system) and the narrative Huxley actually created.

Bernard is no hero. Quite the opposite. He is a cowardly little worm, interested only in himself and what others can do for him. Lenina is not worthy of fighting for, as several male characters ultimately discover.* Even John, the ‘savage’, is ultimately misguided on a number of levels and ultimately devolves into cruelty and hatred. The only vaguely heroic (or at least decent) character is Helmholtz, and his heroism only goes so far as to ask for an uncomfortable exile because he thinks it will help him write better poetry.

I was actually rather amazed that this was written in the 30’s. I expect some people read this and think “not too far off the actual future”. We might not be driving around in helicopters, but some of the other ideas don’t seem that far-fetched. (I’ll stay away from the suggestions of sexual ‘liberation’ and self-medicating with drugs, as I expect people might actually have very different reactions to these and other topics.) Luckily, the future has also brought with it an intensifying interest in the individual, and what makes us different from one another. I don’t think the ‘society first’ attitude of Brave New World has much chance to find its footing in today’s world, at least to the same terrible extreme.

*N.B. I did not like what happened to Lenina, one of the few female characters, but there is no denying that she is vapid, self-serving, and incapable of intelligent thought. Luckily, this is balanced by many of the men being as equally abhorrent, if not worse. I would almost rather Lenina’s blithe acceptance and promotion of society than Bernard’s entirely self-centred discomfort with it.

If there is a lesson to be learned from Brave New World, I think it is this. The humanities matter. Shakespeare is important, not because of what he says, because of how he makes us feel. The most important part of the book for me is not when John struggles to escape from society, but when he debates with the World Controller about the importance of books. The society of Brave New World takes books out of the equation because books inspire people. Religion (think of it what you will), literature, philosophy–these may not have any place in a world focused on commerce, on happiness, on production. But they have a place in our world.

Perhaps what Huxley is trying to say with the actual ending of the book (no spoilers) is that, even with books as a guide, there is no contending with human stupidity and self-centredness. But the fact that books were removed from this society is important nonetheless. Mustafa Mond says the people of Brave New World don’t want to read because they can’t empathize with the sufferings of literature. But if books had never been taken away from them in the first place, Huxley suggests, perhaps they never would have accepted that society in the first place.

Another note: I listened to the audiobook of the novel, read by Michael York (apparently Basil Exposition from the Austin Powers films). He has a nice voice to listen to and this version was fine; nothing special, nothing problematic.

Bingo square: Not My Wheelhouse

A final note on stars: I gave it 3 stars. It was intriguing, but to be honest, it just really isn’t my wheelhouse. I don’t appreciate this sort of fiction (important and classic fiction though it is) enough to say I adored it, or even really that I liked it.