beforeheader
The Book Bingo Reading Challenge is Here
> Genre: Fantasy > The Belgariad: Not all tropes are bad 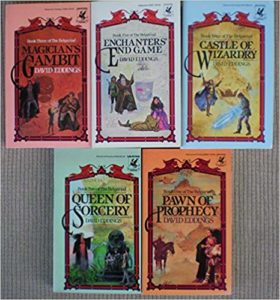 The Belgariad is a series of five books written by David Eddings starting with Pawn of Prophecy in 1982. I discovered the first in the summer of 1985 as an 12 year old on my last day of vacation and by the time I was home the next day I’d already finished it. This included reading in a car and feeling sick as a result but I couldn’t bring myself to put the book down. Luckily the whole series was out by then so I rapidly bought the rest of the books and finished the series for the first time.

It was my gateway into more “grown up” fantasy novels which became the main thing I read as a teenager and I still have a place in my heart for these books. I have paperback, hardback omnibus, and kindle versions still and it’s something I go back and read when I’m in need of a pick me up.

The novels are a classic hero’s journey featuring the young farm boy who turns out to be the long lost heir to a throne and saviour of the world. He’s inevitably an orphan with magical abilities, a wise old mentor, assorted companions, and he marries the beautiful princess he bickers with.

And yes, to an extent it’s a total cliche, but that’s almost the point! In the same way that Jim Butcher later took tropes featuring the Lost Legion and Avatar and came up with the Codex Alera, Eddings took high fantasy and hero’s journey tropes and made them into a series where personality was more important than place. The countries in the books are straight out of the “planet of hats” with the people in them being defined by national characteristics (e.g. the Arends are medieval England with a Saxon/Norman split, Chereks are Vikings, Tolnedrans are Roman), the bad guys are from the East, and the plot is relatively linear. But it just works and that’s because Eddings can really write engaging characters. The wise mentor who’s thousands of years old and revered as a god is actually still an occasional drunk, sometimes thief, and general vagrant. His real skill as an author is in writing snappy dialogue and speeding the plot along (like Dan Brown, but good).

I still love these books and really recommend them to anyone wanting a light-hearted fantasy romp. They’re suited for readers from young adult upwards and support re-reading.