beforeheader
Help us meet our 2021 #GivingTuesday goal. We have raised 25% today alone!
> Genre: Fantasy > Girl has to fall in love with boy, and kill boy, or girl gets killed 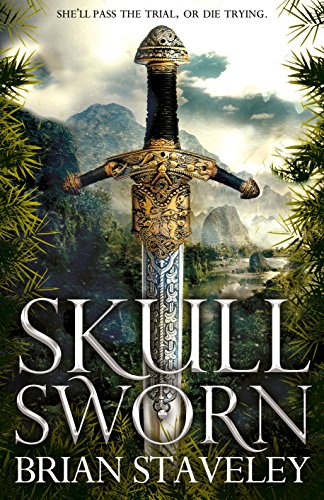 The premise of this book, as summed up in the title, is the ultimate quandary: Pyrre has to kill seven people, including her one true love, in order to pass her final Trial to become a priestess of the death-god Ananshael, or else she must die. The problem is, she has to fall in love first.

As a priestess of Ananshael, death comes easily to Pyrre and her fellow priest-assassins. She sees the beauty in it, and after all, everyone must die someday. She does not fear death, only failure. To complete her Trial, she travels to Dombang, the city of her birth–a conquered city simmering over with rebellion. Pyrre has her eye on someone she thinks she could love: Ruc Lan Lac, a soldier in charge with keeping the peace in Dombang. Pyrre’s solution to her problem? Start a revolution.

I absolutely adored Brian Staveley’s Chronicles of the Unhewn Throne, which I read last summer as fast as I could. It’s an epic tale of three royal siblings who stand at odds after the death of their father; the immortal ancient creatures who want to see the destruction of humanity; and a world where gods aren’t just looking down from above. Skullsworn centres around one of the more interesting side characters in the novel: the priestess-assassin Pyrre, but it is a stand-alone novel that could easily be read without having read the trilogy first. The world might be better understood after reading the trilogy, but for the most part is very self-contained.

This book is almost as good as the preceding trilogy: how could it not be, with a premise like this? And the plot does not disappoint: there is tension at every turn, whether from the revolution in a city which clings to its bloodthirsty past, or from the need for Pyrre to fall in love with Ruc, who is a match for her in more ways than one. Yet there is more depth to the story than this, depth that infuses the city of Pyrre’s birth and Pyrre herself, tied up in the inhabitants’ conflicted views of religion and identity.

One of the reasons I like Staveley’s world so much is that his religion is more than just ‘death-god, love-god, fire-god’. These religions are complex and the gods are more than mere figureheads, and the people who follow them are complex. I get really tired of organized religion being evil in novels; perhaps this is part of being Catholic, in that I know religion doesn’t make people automatically good (as has sadly been proven so many times in recent years by priests) but also that religion isn’t an automatic evil either. In Skullsworn and the Chronicles of the Unhewn Throne, people might do bad things for their religion (e.g. Pyrre being an assassin, people sacrificing humans to the Dombang gods) but its not that the religions themselves are inherently evil. It’s much more nuanced and fascinating and a huge plus to Staveley’s worldbuilding, alongside the idea of there being ancient immortal races who have survived in secret.