beforeheader
Sept. #CannonBookClub: The 1619 Project, All Boys Aren't Blue, and The Hate U Give | Discussion Sept 16-17
> Genre: Comedy/Humor > My first (almost) introduction to Pratchett, and it was a great one (Bingo Square: White Whale) 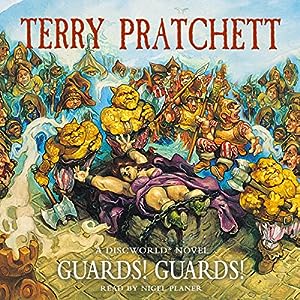 I recently decided to get back into audiobooks to listen to while going to the gym. The gym is not my idea of fun, so I wanted something that would be–well, fun! I’ve been meaning to read Pratchett for years now, having only read (and loved) Good Omens before this. Guards! Guards! was one of the ones people recommended starting with. Luckily the audiobook was available on my library’s Overdrive, so I downloaded and gave it a chance.

The story opens with the Grand Master of the Elucidated Brethren of the Ebon Night meeting with the brothers of that “sacred” order. Their (at least, the Grand Master’s) plan: to summon a dragon, feign a dragon-slaying, so that the GM can raise a puppet king in place of the Patrician, who governs the city of Ankh-Morpork. Meanwhile, Carrot, a young man raised by dwarves, is finally told the truth: he is not a six-and-a-half foot dwarf, but a human, and so he is sent to Ankh-Morpork to do human things, like join the once-revered Night’s Watch–which now consists of the drunkard Captain Vimes, the cowardly Sergeant Colon, and the slimy Nobby.

From the beginning, I was hooked. The narrative voice (Pratchett’s) is so strong, so unique, and most of all, brilliantly hilarious, and Nigel Planer, the reader, does a great job with the voices. I especially liked Vimes’ nasal world-weariness. Pratchett manages to make all the characters simultaneously flawed and irresistible: drunks, idiots, orangutans… I especially enjoyed Lady Sybil Ramkin, the dragon-obsessed spinster; the growing impatience of the Grand Master with the Elucidated Brethren of the Ebon Night (especially Brother Duddikin); and Carrot’s naivety when dropped into Ankh-Morpork’s society.

The plot was delightful, never quite going as I would have expected (especially the ending), but providing plenty of laughs along the way. Four solid stars for this one, and a special shout out to the greatest line I might have EVER read in my life:

Thankfully I was listening at home when I listened to that bit, because I cackled a lot, paused, and told my husband (who didn’t seem as excited about the pure genius of that line, but perhaps that’s because he’s not a Roman historian like me).

Bingo Square: White Whale (since I’ve been meaning to read Pratchett for years).

Previous Bingo Squares: Underrepresented, Brain Candy, Cover Art, This Old Thing, Throwback Thursday, And So It Begins, Birthday!, So Shiny! (Is it obvious that I’m doing this randomly rather than striving for bingos? They will come… eventually…)

That is a great line and that is exactly why I love Pratchett. His ability to just throw those lines at you is outstanding!

Oh, I got into audiobooks because I needed more things to listen to at the gym as well!
I’m glad you enjoyed this one And if you really liked lines like that, there are plenty more like it in the series. And some glorious puns.

Audiobooks honestly help me so much at the gym, just to have something else to focus on besides how bad I am at exercise. Music isn’t good enough because I tune out music very easily. Listening to Mort now and enjoying it! I think the trick will be to only listen to it at the gym without cheating…