I’ve been reading more Terry Pratchetts as the days have gotten colder and darker (Denmark is so, SO dark.) They always make me chuckle; his wit is brilliant. The little puns (“gastro-gnome”) and subversions of expectation are perfect, and I really adore the way no character is above being made fun of.

To my mind, the Watch books exemplify these brilliant talents best. That might be because I’ve read most of them, but I also think it’s that the combination of characters is just done so well. Vimes is always great, but I actually prefer all the characters around him best. The Watch is full of characters that make me laugh on what feels like every page.

Please note–as this is a roundup review I have posted the Amazon links as the title of each book. I’ve discussed these in a less organized fashion than I normally do multiple-book-posts, but it’s still somewhat divided between Watch books and Witch books. 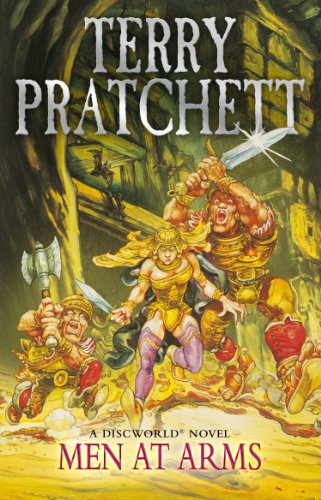 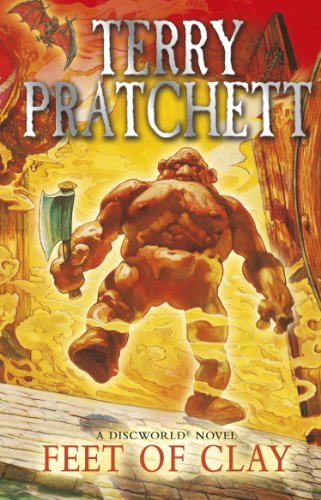 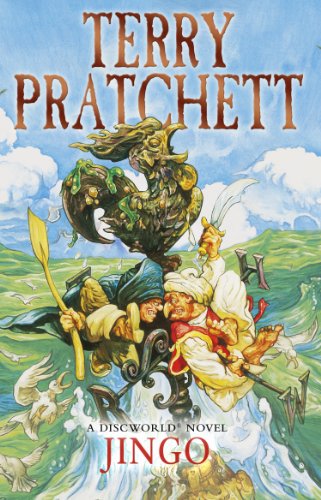 In the last couple months I’ve finished Men at Arms, Feet of Clay and, most recently, Jingo. The second was on audiobook and the first & last regular e-books. I quite like the audiobooks, read by Nigel Planer, though after reading Men at Arms, which introduced several new characters, it was a bit jarring to hear his voices for them (Detritus the Troll with a Scottish accent?!) On the other hand, the drawback with e-books is that it’s a bit of a pain switching between the main text and the footnotes (at least on the overdrive app).

I really liked the introduction of Angua the Werewolf, a new Watch member, although it’s a pity that there only seems room for one woman in the books–I do miss Sybil Ramkin having a bigger role, as she was so funny in the first book. (At least there was one other woman with a large role in Feet of Clay, although she did not have such a big role in Jingo… Such is the drawback of a big cast.) But Angua has the benefit of fleshing out Carrot, who is actually one of my favourites. He had such potential to be utterly bland, yet his sincerity and uprightness are admirable, and the sense of humor that lies buried deep under that goodness keeps him from being boring. Carrot is also brilliant for how other characters react around him, usually with utter bemusement. I did appreciate how Vimes’ jealousy shows through at times (especially in Jingo), and how Angua struggles with her identity in their relationship.

But I think Sergeant Fred Colon and Corporal Nobby Nobbs are the ones who make me laugh the most. I’m delighted that, even as the Watch grows, these two still have time to shine. Whether it’s Nobby’s genealogy in Feet of Clay, or the adventure they both have with Lord Patrician Vetinari (another amazing character) in Jingo, they get the biggest laughs from me–usually muffled as I read or listen in bed as I try not to wake my husband. Their banter was my favourite part of Jingo, as Nobby (inadvertently?) undermines Colon’s cowardice, stupidity, and racism, but never without losing the lack of basic sanitation that makes him Nobby.

In terms of plot, Jingo was the weakest of the three, focusing on an impending war between Ankh-Morpork and nearby Klatch (basically a Middle East analogue). I love the procedural of the Watch books, even though it’s usually pretty obviously “whodunit”. But Jingo was less about the corruption of the guilds and power struggles between the different strata of Ankh-Morporkian society and more about the power struggles between two nations. A twist on the norm is nice, but sometimes the norm itself is still best.

Feet of Clay was probably my favourite in this regard, as Vimes tries to find out how Vetinari is being poisoned. (The relationship between Vimes and Vetinari is another of the highlights of the Watch books.) It twists together two subplots in a satisfying way, though Men at Arms probably had a more coherent through-line. Both books are also great in the way they play with the ideas of ruling the city and with its past history, when Vimes’ ancestor overthrew the monarchy, exemplified in the current attempts by disgruntled men to raise someone to power in Vetinari’s stead. While Feet of Clay does this in a humorous way, with the nobles trying to make Nobby a puppet king and being forced to deal with his ridiculous social faux pas, Men at Arms furthers Carrot’s character in a satisfactory way. It is no secret that Carrot is the long-lost royal heir of the throne of Ankh-Morpork. Even in the first book (Guards! Guards!), this is made painfully obvious. What isn’t obvious, and what underlines the evolution of Carrot’s character, is how he and those around him deal with those revelations. 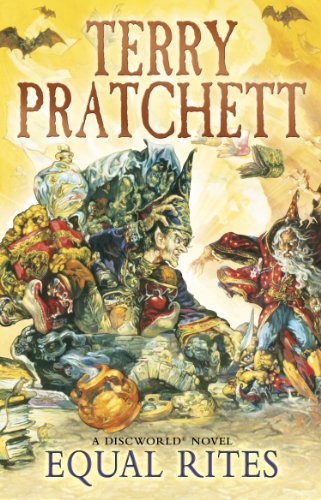 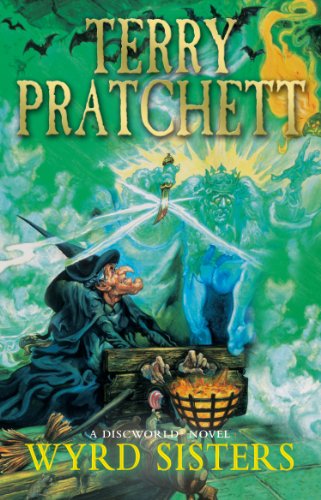 As well as continuing my forays into the Watch series, I started the Witches series as well, listening to first Equal Rites and then Wyrd Sisters. I had mixed reactions.

The best part of Equal Rites is the pun in the title. *chef’s kiss* It concerns Eskarina Smith, a little girl who is accidentally gifted with wizard magic and who wants to go to Unseen University. The catch is that wizards are not female. The local witch, Granny Weatherwax takes Esk under her wing and tries to teach her witch magic, but Esk is torn between the two worlds. To be frank, I was rather bored by this one. It was lots of traveling (NOT my favourite fantasy trope), and I thought the ending was too abrupt. I might even have stopped reading the Witch books (at least for now) if I hadn’t already downloaded Wyrd Sisters. But I’m thrilled to report I kept with it and was repaid in multifold. (I just don’t have much interest in the wizards, I must admit!)

A quick note: Celia Imrie did a fine job reading Equal Rites and Wyrd Sisters, but in the version of ER I listened to, the sound quality was not very good. As I just got it from my library via the Overdrive app, I fear this is a problem with the actual production and not just my download.

Wyrd Sisters, on the other hand, was brilliant. Taking story elements from Shakespeare, particularly Macbeth and Hamlet, Pratchett wove these together in a way that was just plain funny, and even funnier because those elements were so recognizable. Granny Weatherwax returns, this time with Nanny Ogg (who I want to be my BFF) and Magrat Garlick, whose overeager, vaguely “new age” tendencies in the occult made her both familiar and hilarious. When King Verence is assassinated by his cousin, his baby boy is taken away by a loyal guard and ends up being given to the Witches for protection (and the hilariously terrible name of Tomjon). Meanwhile, the new King and his cruel wife begin to run the kingdom by fire and the sword, and the witches are torn between intervention and their desire not to interfere. As is usually the case with Pratchett, the end “twist” isn’t actually a twist, but that doesn’t detract from the enjoyment of the book. It’s not the sort of book where a twist is necessary, it’s the kind where you see it coming a mile off but still enjoy the setup. Best of all, Wyrd Sisters didn’t fumble the ending like Equal Rites–it’s a brilliant culmination of all the plot elements that have been brewing throughout, even including the weather. I’m excited to read more about these witches… especially if I get more drunk Nanny Ogg singing about hedgehog unmentionables and the knobs of Wizards’ staffs.

N.B. This review was edited from when I first posted to include links and images.